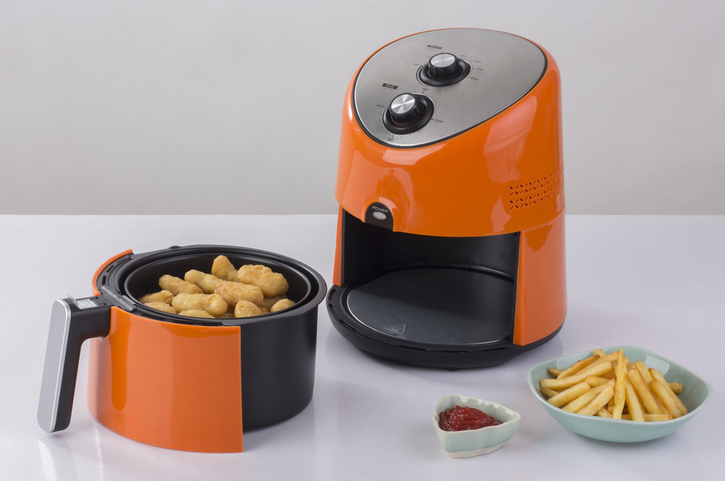 With scientific advancements and increased awareness of the health hazards of certain foods, people are now looking for healthier options. Right from the ingredients to the proper cooking technique, everyone out there is making efforts for something ‘healthier’. One such invention to make food healthier is an air fryer. Air fryers are used to fry food with minimal or no oil. This tool is advertised as an item which provides you with a healthier, low-fat version of fried foods such as French fries, fritters, chicken lollipop and more. But is that food really healthy? Or is the air fryer producing something more harmful? Let’s find out!

How does an air fryer work?

So what do you love most about fried foods?

The crispy crunchy exterior isn’t it! Well, you can get the same even by using an air fryer and that too, with lesser oil. An air fryer circulates fine oil particles through hot air which leaves the exterior of food crispy, just like the traditional fried food, only with lesser oil. This effect is known as the Maillard effect which takes place when an amino acid interacts with reducing sugar in the presence of heat. As a result of the Maillard effect, the taste, and color of food changes.

Air fryers are termed as a tool which produces fried food with minimal oil. So you get the taste but with a lesser amount of fats and calories.

How much fat content does an air fryer remove?

Air fryers cut down the fat and calorie content of food by using less oil. Manufacturers claim that an air fryer cuts down the oil content of fried foods by 75%. Traditionally, frying requires 3 cups of oil, 750 ml approximately. However, air fryers require only one tablespoon of oil which is around 15 ml.

A study pointed at the characteristics of deep fried and air fried food and found that the two are similar in terms of taste and color but are completely different in terms of calorie content. As a result, you end up consuming lesser oil and the risk of obesity and weight gain is reduced.

Traditionally deep fried foods produce a component called acrylamide. This component is produce when carbohydrate-rich foods are cooked in heat. Research says that this component is potentially cancer causing. It is linked to an increased risk of endometrial, ovarian and kidney cancers.

Using an air fryer will lower the production of acrylamide in fried food. However, this does not mean that air fried food is perfectly safe. It may still contain Aldehydes, heterocyclic amines, and polycyclic aromatic hydrocarbons, which are all cancer-causing components produced in high-heat cooking. It is not quite well-known why these components are produced though.

Nevertheless, it is still fried food…