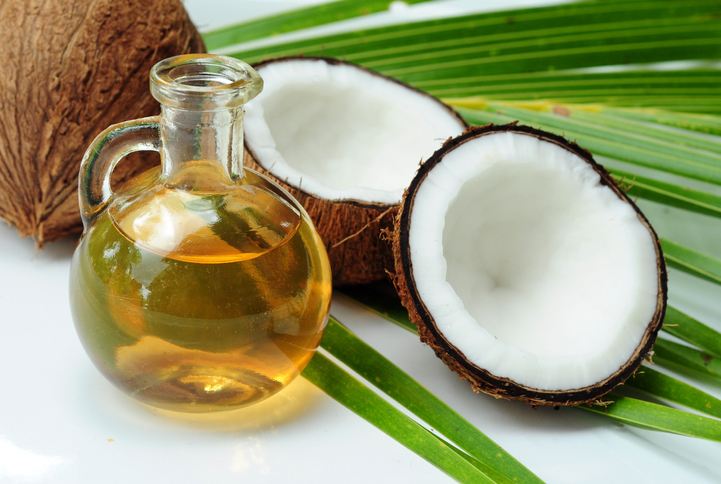 Are the claims about coconut oil lowering cholesterol, blood pressure, heart diseases true? All the current information available on coconut oil makes us wonder whether the oil is the correct choice over others. Websites too are making larger than life claims of coconut oil’s many benefits such as helping promote weight loss, curing hypothyroidism among others.

Previously the coconut was thought to raise cholesterol levels though people in various coastal regions around the world consumed it with no apparent adverse effects. Current research recommends coconut consumption for its rich nutritional benefits. Coconut in its various forms and the oil are definitely a healthy addition to one’s diet.

Coconut is a nutrient-rich one-seeded drupe. It is a good source of iron, phosphorus, zinc, and other minerals and vitamins. It is also a good source of protein and fiber while containing a few naturally occurring sugars. Around 92% of coconut fat is saturated. This has lead to the belief that coconuts are ”bad for health”, particularly in relation to heart disease. Recent research, however, has established that most of the saturated fats in coconut are medium-chain fatty acids whose properties and metabolism are different from saturated fats of animal origin. The lauric acid in coconut oil is used by the body to make disease-fighting fatty acid derivative monolaurin.

The coconut tree bears fruit all year round. Studies show that every coconut cultivar has its own unique characteristic which explains variances in the percent composition of fatty acids like lauric fatty acid in the oil. This is attributed to factors such as location and varietal differences. Ten to thirteen-month-old coconuts have the highest oil content.

MCT are good fatty acids. When ingested they are readily burned in the body and dissipated as energy, unlike LCT which goes to the circulatory system before finally being used as energy. This process leaves fatty deposits in the tissue. Prematurely born infants given MCT-enriched diets increase their fat and mineral absorption to the same level as in normal term infants. MCT is a good source of energy for the sick and convalescent too. Most tube feeding formulas contain MCT’s as the source of fat and energy. Studies show that the intake of MCT-rich foods or supplements 30 min before meals results in a significant decrease in calorie intake.

Although these are great findings for justifying the consumption of coconut oil along with another omega 3 fatty acids rich oils, this is no reason to indiscriminately consume it. Large amounts of any oil are it coconut oil or olive oil, are unhealthy. As much as possible the oils should be ingested without heating. If used for cooking the cooking temperature should be kept as low as possible. Hydrogenated forms of oils should never be used.

Coconut oil contains less than ten percent unsaturated fats. This makes it the most stable oil not requiring the need to be made stable. In contrast, certain vegetable oils containing good amounts of polyunsaturated fats need to be partially hydrogenated in order to make them stable. Partial hydrogenation produces trans-fatty acids that causes elevation in cholesterol Clinical studies done at the New England Deaconess Hospital (NEDH), a Harvard medical school affiliate, show that coconut oil is neutral in its effects on blood lipids and does not cause an increase in cholesterol. At the same time, coconut oil increases the High-Density Lipoprotein (HDL) or the ‘good cholesterol’, further reducing the risk for coronary heart disease. From a plethora of research reports, it appears that there is lowering of total cholesterol and LDL cholesterol in hypercholesterolemic on the incorporation of coconut oil in the diet.

Biologically active substances naturally occur in plants and when the oil is extracted from oilseed, most of these substances are present in the oil.

As plant product, coconut oil contains biologically active substances which have been identified to provide various health benefits. Although studies may take years to probe the pharmacological effects of these substances, there is growing interest worldwide in the role of these biologically active substances in health and disease. Tocopherols, known as potent antioxidants, have a role in the prevention of certain chronic diseases like coronary heart disease and cancer. Tocotrienols said to be better antioxidant than tocopherols are effective in treating many ailments.

Phytosterols have been known to lower the LDL ‘bad’ cholesterol. Phospholipids are important emulsifiers and essential constituents of cells. MCT is a good source of energy to the sick, convalescent, healthy individuals and also to preterm infants. Phytochemicals are linked to cancer prevention and mono- and diglycerides as antimicrobial and antiviral substances. Flavonoids (isoflavones) and other polyphenols, stanols help in preventing/curing some chronic diseases.

Plenty of studies have been conducted and coconut oil is being researched upon for its weight loss and other health benefits. A study aimed to analyze the effects of dietary coconut oil on the biochemical and anthropometric profiles of women presenting abdominal obesity. The trial involved 40 women aged 20-40 years. The groups received daily dietary supplements comprising 30 ml of either soybean oil (group S) or coconut oil (group C) over a 12-week period, during which all subjects were instructed to follow a balanced low caloric diet and to walk for 50 min per day.

At the end of the trial, Group S presented an increase in total cholesterol, LDL and LDL: HDL ratio, with a decrease in HDL levels. Such changes were not observed in group C. The study thus proved that the dietetic supplementation with coconut oil did not cause high lipid levels and seemed to promote a reduction in abdominal obesity.

Oils like fish oils, flaxseed, extra virgin olive, krill oil have great health implications. It is preferable to incorporate a small amount of different oils rather than relying primarily on one type. This way one derives benefits from a number of different fatty acids rather than just one.

Fish oils and flaxseed oil are the healthiest options, but virgin olive oil, virgin coconut oil have extraordinary health benefits too and should be incorporated in the diet.

Rejecting the strong set belief of coconut oil being unhealthy for heart health, recent research and study on the nut encourages it to be used for cooking up meals or just as such or in various food preparations. In such a case it should be replaced with the current oil rather than just simply adding it to the day’s intake. An individual’s total visible fat intake (oil, ghee, butter, cream, margarine, mayonnaise) should not exceed 25 to 30ml per day with 30 being the upper limit for sound heart health and 25 being the upper limit for cholesterol reduction.

In a nutshell coconut oil offers protection from heart disease, cancer, and other degenerative conditions, improves digestion, strengthens the immune system, and helps in weight loss to some extent. Coconut oil is now being labeled as one of the ‘healthiest dietary oils on earth’.